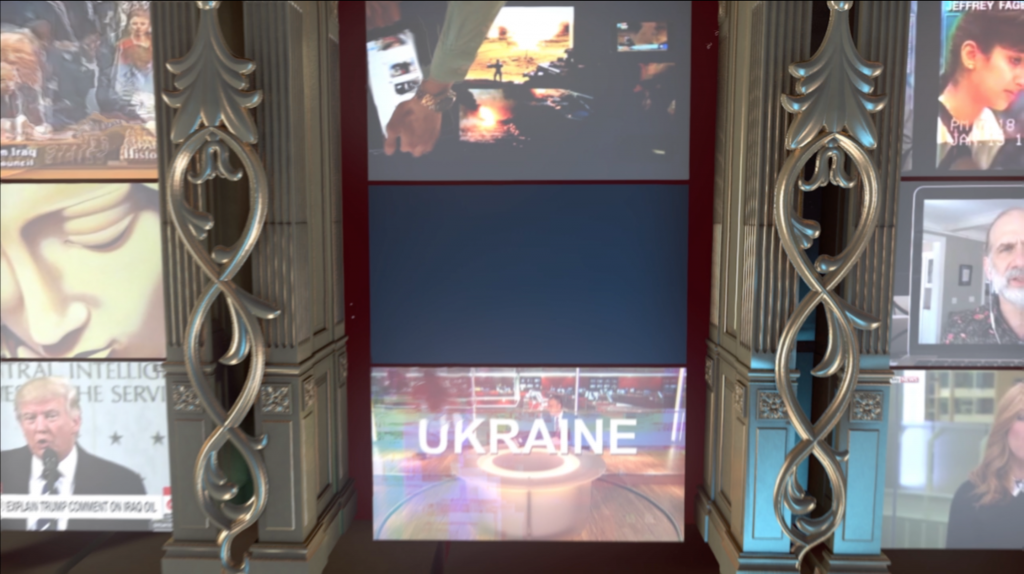 A refined transition render for a specific part of the film. Clips to be inserted to replace static. I have drawn up an almsot compelte narrative sequence for what is to be shown and what renders I’ll need for each part of the film. We can discuss the sequence in detail tomorrow. 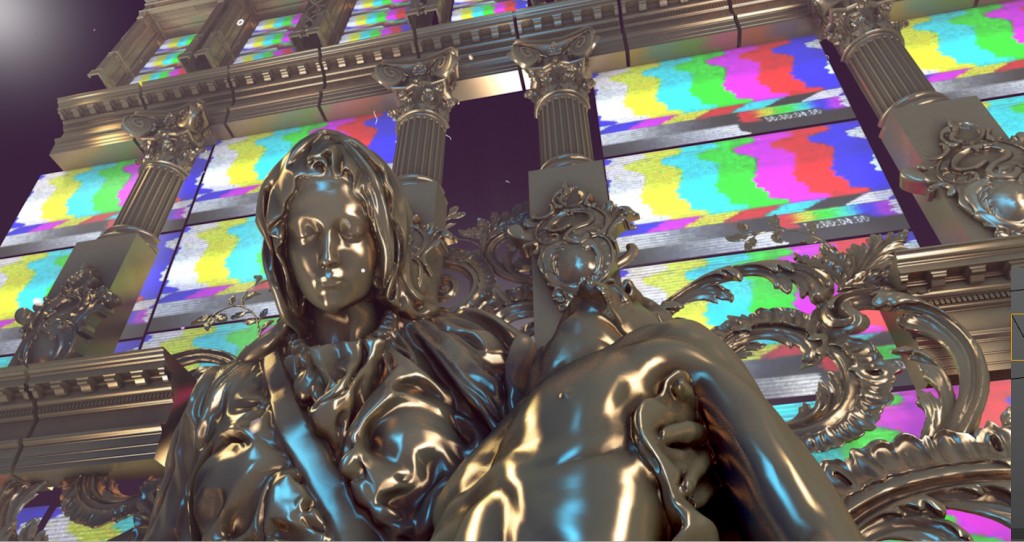 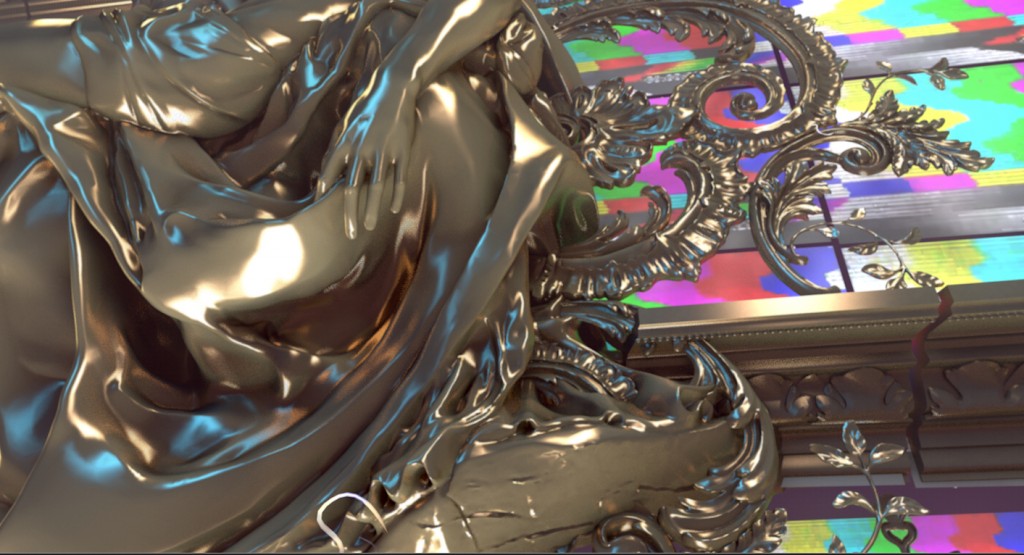 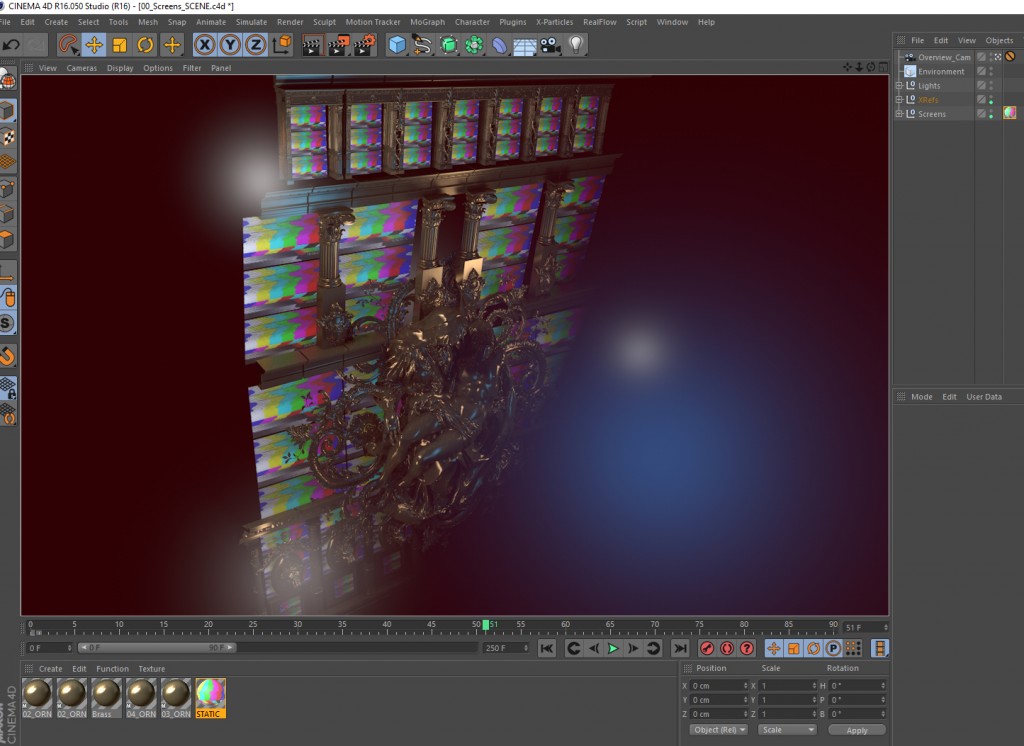 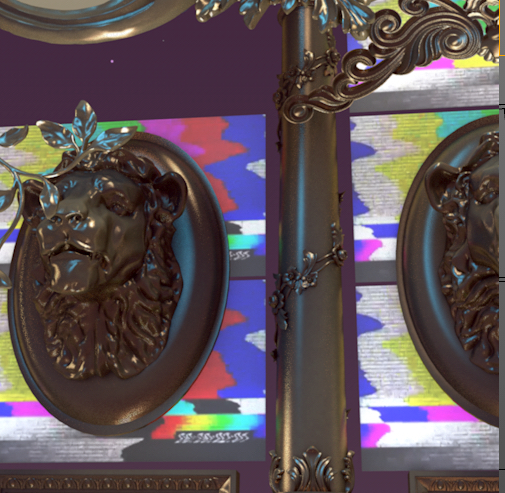 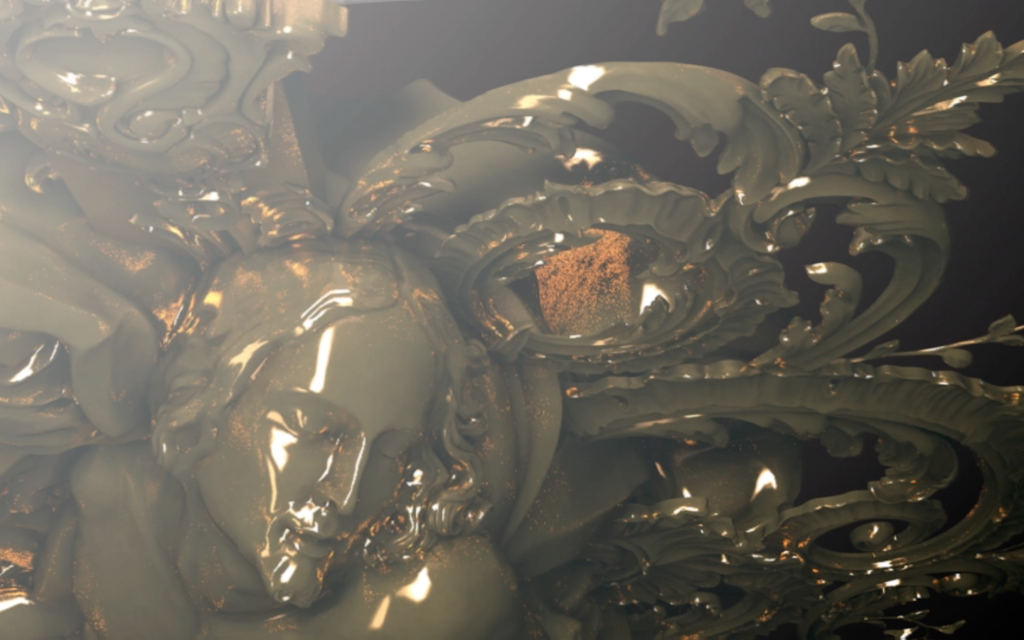 Have been conducting some render tests on the Vatican-of-Screens model – Testing fluid dynamics and (unsuccessfully for now) tried to map a film onto the fluid. In the second clip the screens are placed between the ornaments and given footage as we pan out and over the surfaces.

Telescape – A FACTory of Surfaces

Working on the models for the scenes I’ve metioned yesterday.

Some points on yesterday: 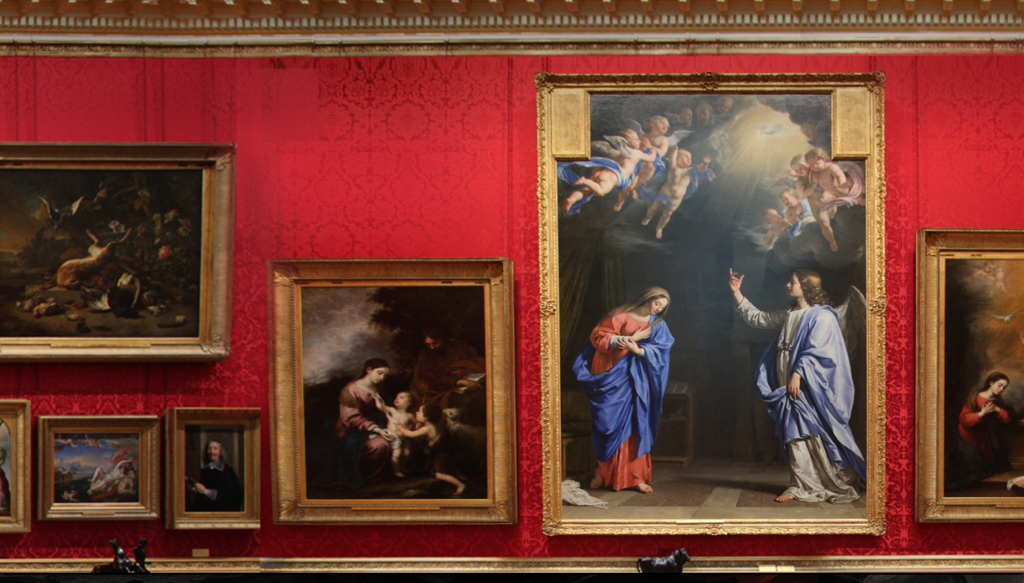 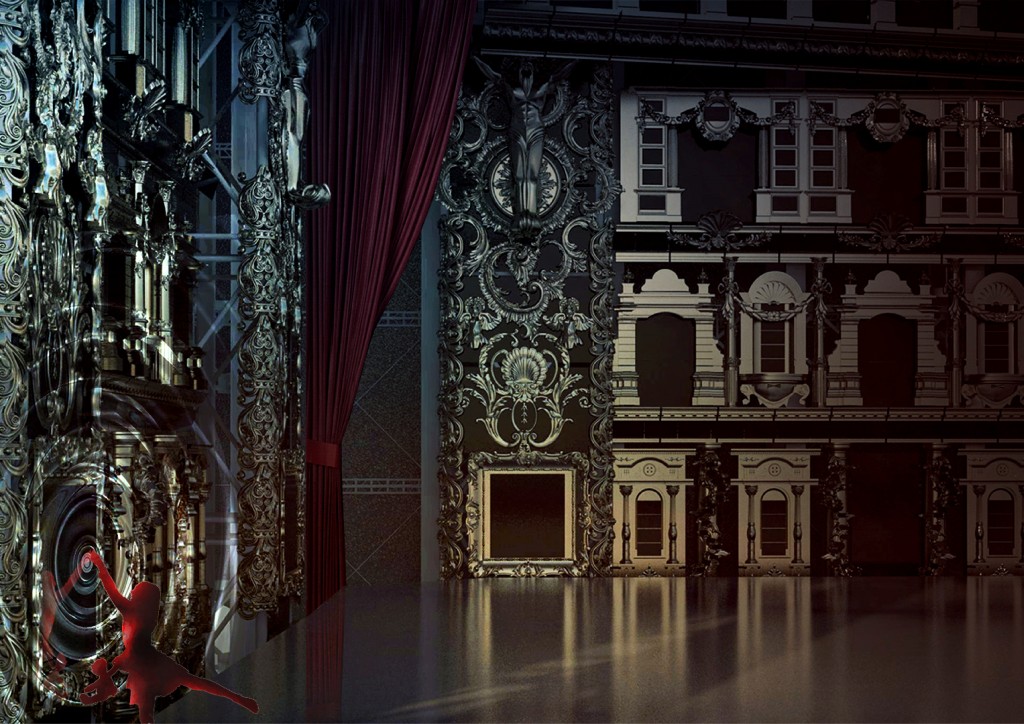 EDIT: The Disappearance of the Biennale

Advanced age offers an opportunity to reason in retrospect
when a man is faced with the mass of what he has accomplished
it results faintly in the question of “why?” Why breathe? Why write?
Each field has its own balance between old and young, old and new.
Among the concert pianists, the innocence is in the speed of fingers
and the long-established fact of the classic repertoire. The biennale
has become an institution for the young to play by the rules set out
by their parents. The fight doesn’t seem to be so much about age
as in establishment. In architecture, the young do their studies
under the supervision of a professor, while in popular culture
the professors devote their time to analysing what youth
is up to at the moment, which gadgets they purport
which clothes they flash, which games they get lost in.

Give the teenagers a can of spray paint, and they will tag
all the railroad cars, all the motorway overpasses, and all
the abandoned warehouses. Give the teenagers Minecraft
and they will build their homes unlike everything seen
through the lens of the literati. All taste is acquired
but the feverish activity of the scooter gang fills us
with a sort of impoverishment of admiration, that is
we lack the will to repeat their acts. Because we want?
No. Because we are. Still young, still with us, still beating
the youngsters in their own race to be the most radical.
Part of growing up is part of knowing that you can’t be
any more different than the others around you.
Each schoolyard has its own pecking order.
Each biennale has its own dedicated judges.

The biennale is a smokescreen; within it, we are let to know
that there is no escape from the new-ness that is produced
by those ideas offered by the curator. One should always look
with certain suspicion towards the making of competitions
because the ones deciphering it are also those most keen
to displace real, possible concepts for could’ve-been-real.
The biennale’s first fault is in being a biennale itself.
It presents itself as the central event of architecture
that year, a place where the culture of this architecture
can thrive and profusely overcome the ghost
of the retort: “it-has-been-built-before.”
The young are not fooled, they are hungry.
We who do the catwalk are young
but we who celebrate it are old.

The only reason for the biennale to still exist
is for it to disappear in its current form. It is not enough
to throw us a bone and then expect great things to come
if we’re still caught in the 10-12 grind of model-building
and door-positioning. Someone else is always there
to seize the credit beyond the office. A new collective
needs to be invented for Venice, this city of supreme nostalgia
built on a morass of decaying larch poles, the place where Bond
met the demise of a career beyond the action blockbuster.
The biennale needs to go away in order for it to come back.
What we’re facing in our choice of career is not buildings
that is what concepts are to philosophy, a mere by-product
of the activity that led up to making a living. How much
is an artefact worth? Not much. The joy is not in the win
it is in the fight! 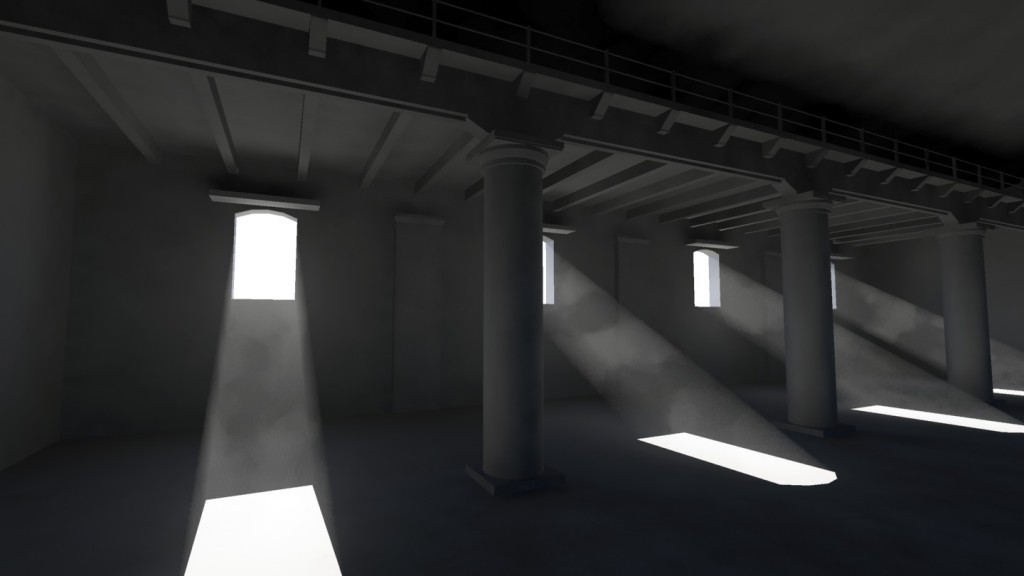 Took me ages to learn how to render this scene properly, and although it doesn’t look like much, it was hard-earned money. The more you know! 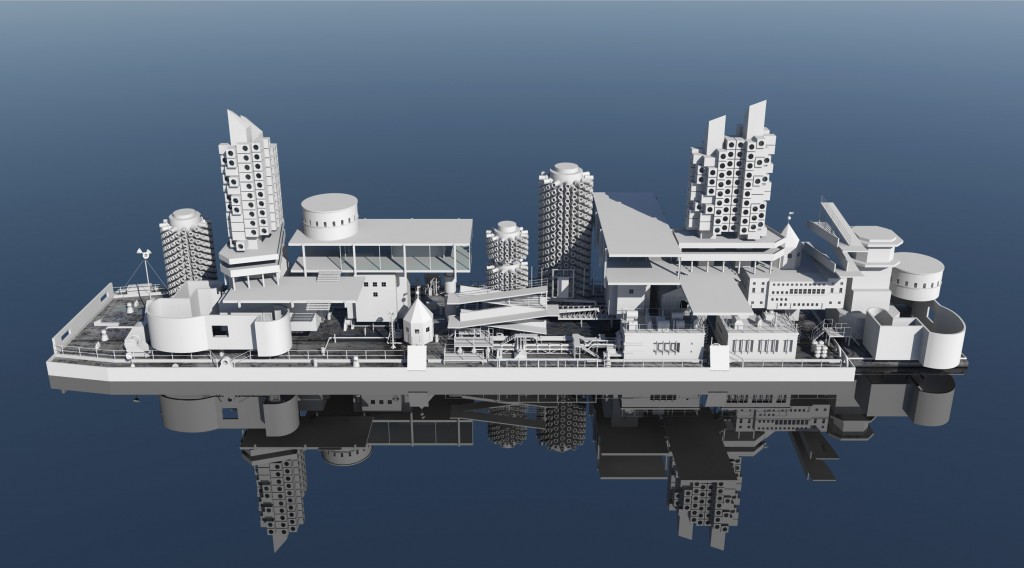 Now for Photoshop and the customary poem.

A bit of Kikutake 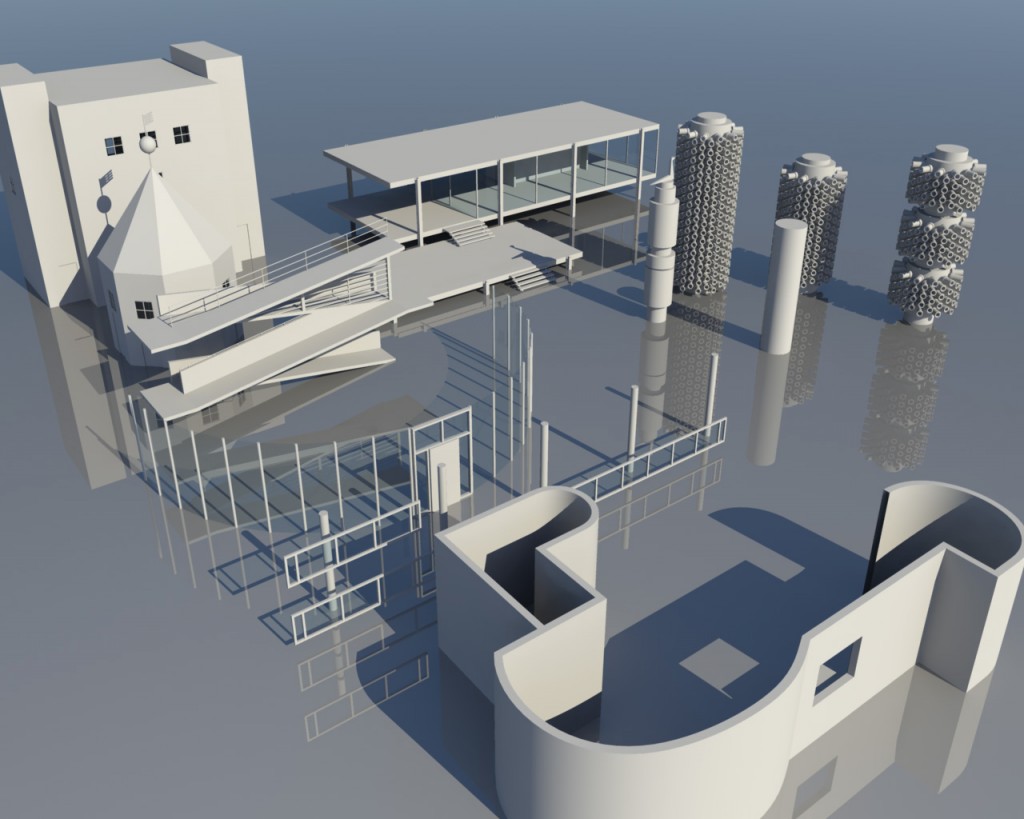 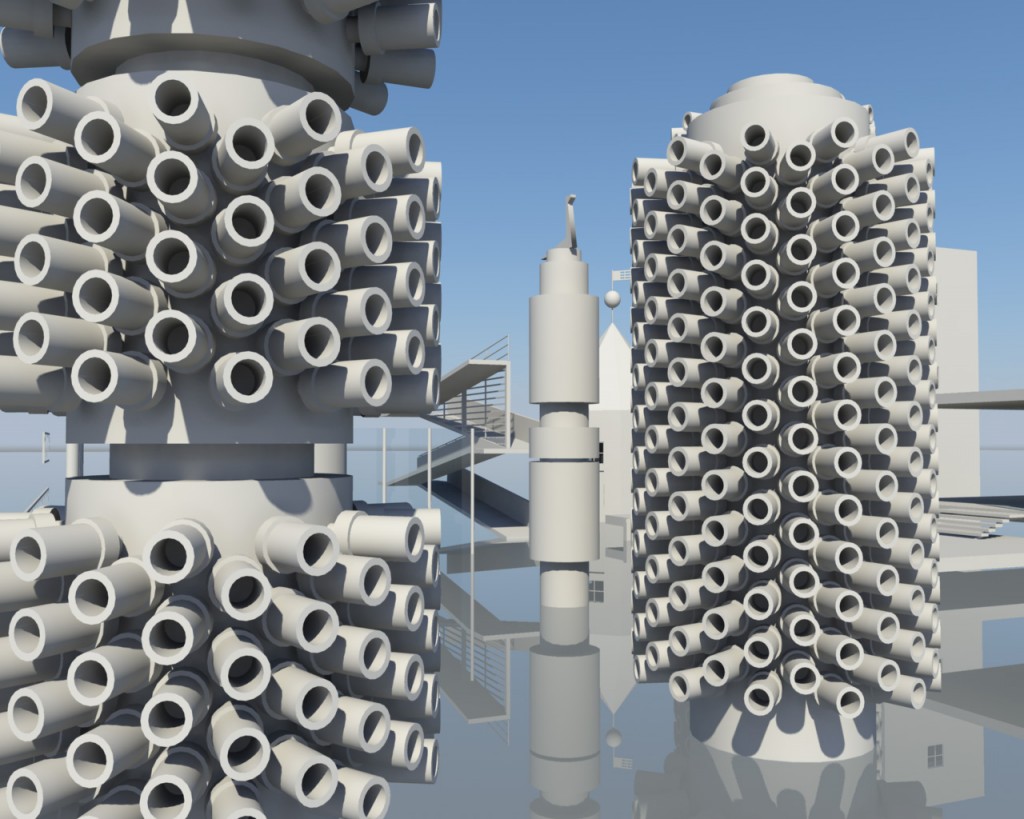 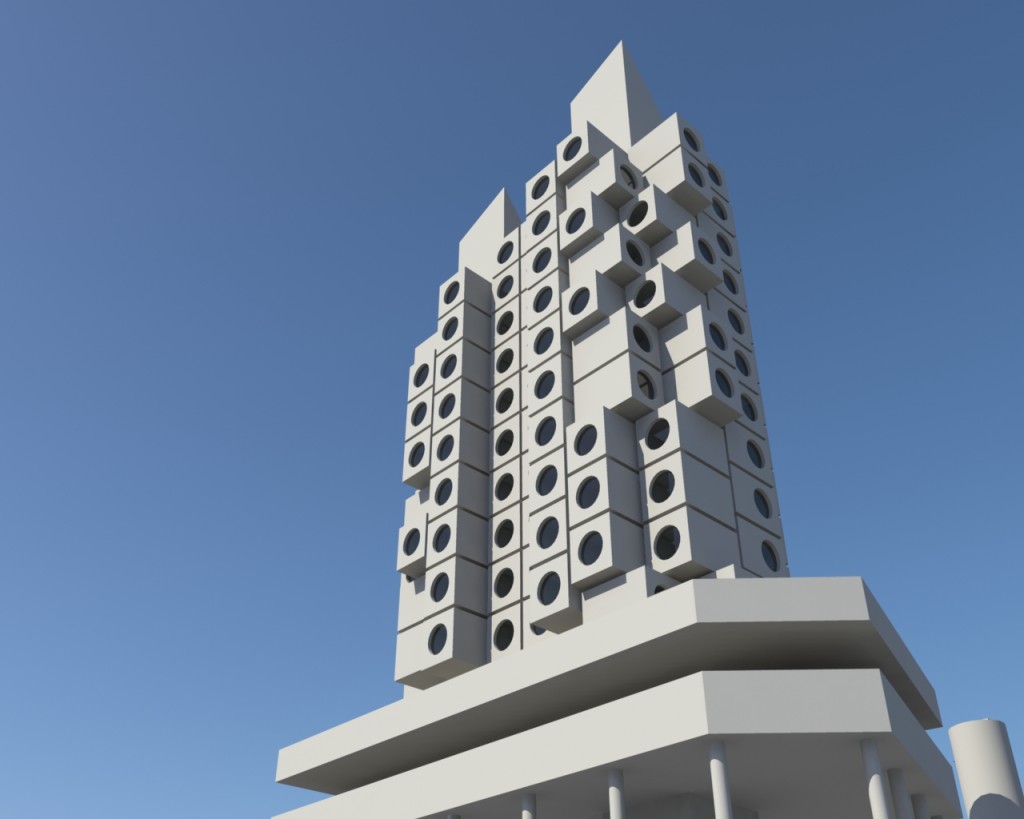 “To listen to Daft Club front-to-back is — and it’s pointless to exaggerate here — to watch a loved one be physically dismembered.”

Amassing the history of architecture in order to cut it up, like the city of clichés i worked on before, to put together a Frankenstein’s Paradise on the barge that will take us to the next paradigm. 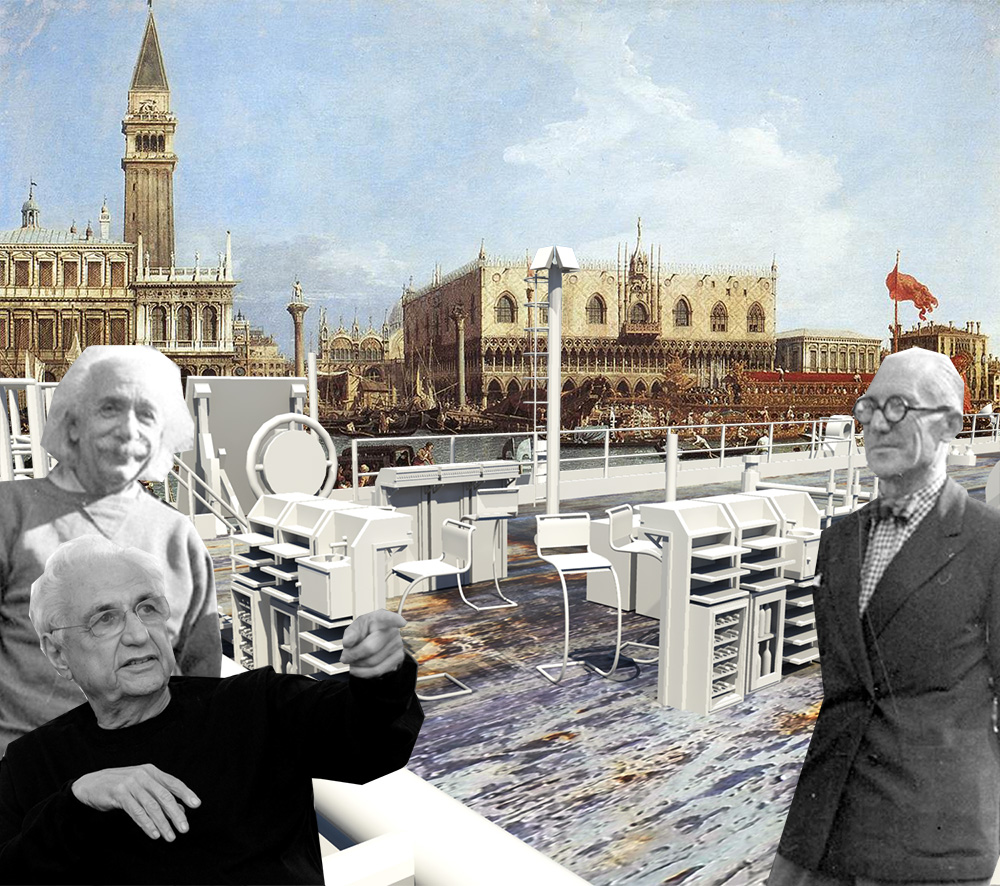 Mies lent his cantilever chair for the bar stools.

The Arrival: Venice rises with the sun, to the first day
of Rem’s new archi-fiesta, and as he is preparing to give
his opening speech, all the architects turn their attention
away from the sea, to the mass, the building mass.
They don’t see what’s happening in the lagoon.
So suddenly, a loud CRASH! The ground shakes, people run.
From the channel, a vessel ten times the size of a canal house
has stranded upon St. Mark’s Square; after the dust has settled
the architects are assaulted by a barrage of advertisements
all built from the icons of the past. This is the Next Big Thing!

But what, precisely, is it that is so *irresistible* about it that it fools
an entire army of architects-in-the-know, even the master himself
to board it and sail away? Is it its being a city without a country
a city where, finally, it is the architects who are in charge of it
as opposed to the politicians, to the lawmakers, the masses.
If you can’t make it on land, build your own. This is your ground.
The metropolis of the future will not be linked together by airlines
it will have no links at all. It will sever its ties with the discontinuous
and old Europe, the tired Americas, as well as the emerging Far East.
On this barge, a whole new culture will arise, it will be the glory
of a community where everyone has the wits
to appreciate Modern architecture.

From Bauhaus to our house
has been hacked: it is now
from Venice to Eternity. 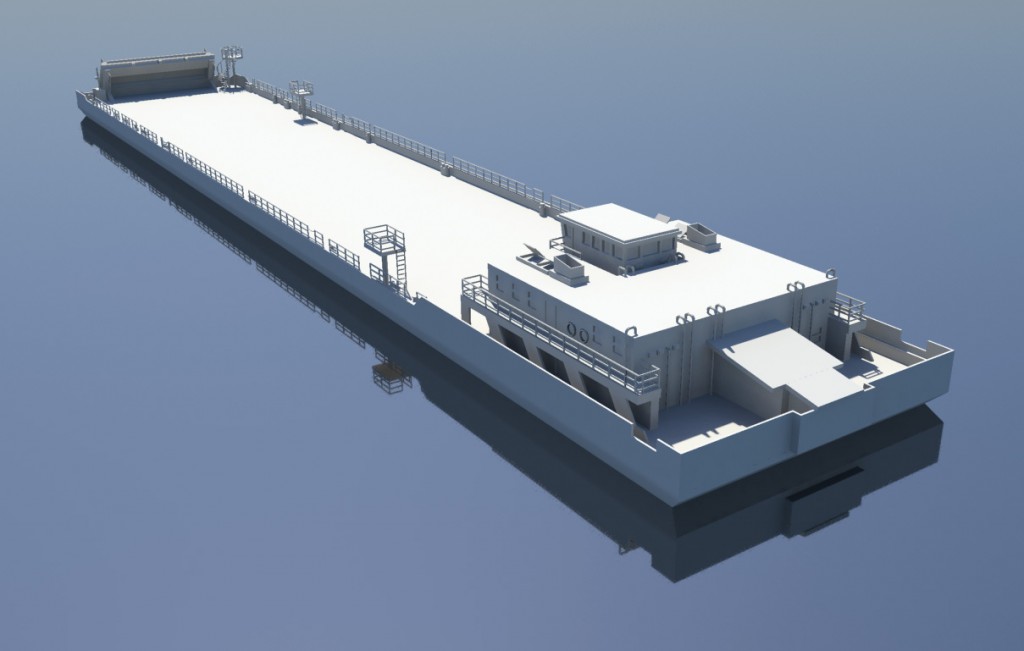 Beginnings of a Barge 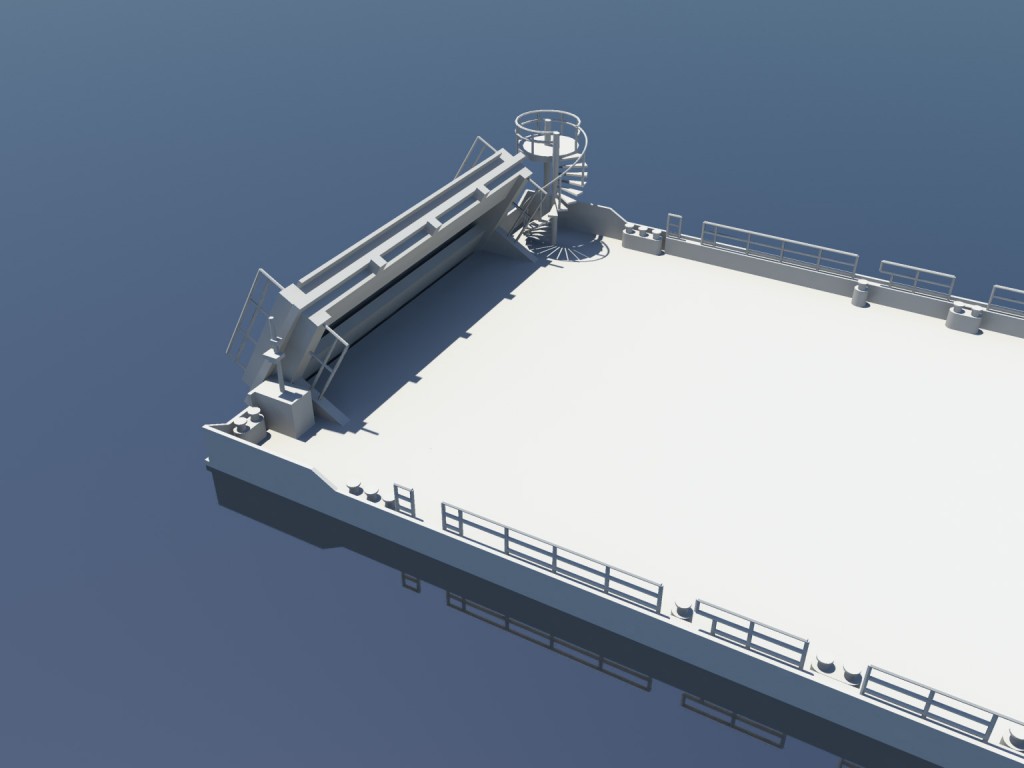 The one-concept house and the one-trajectory city
are not so much impossible as they are impotent.
The elaboration of a building into many problems is a sickness
but the curtailment of these problems into one solution, one gesture
is a bad cure. To say: this is what my project is about and not stray
from the path, is to follow modern principles in a postmodern stratum.
What it needs to be replaced with: complex eclecticism, which addresses
several narratives at once, parallel stories and multilinear synthesis
of the products and skills at hand. The first inspiration: the critical path
of the building process, expanded to become a pluralist’s morning walk.
(There is always another bus arriving at the stop.)

The four trajectories: house for a house (inside to outside)
the quarantining of dangerous clichés (backward to forward)
the city that is a cut-up story of release (confinement to escape)
and the exodus of the master architects (centre to periphery).

Had a very unproductive weekend due to sickness. Back in the game now and will work until late. Tomorrow everything will be ready to print, incorporated with models. 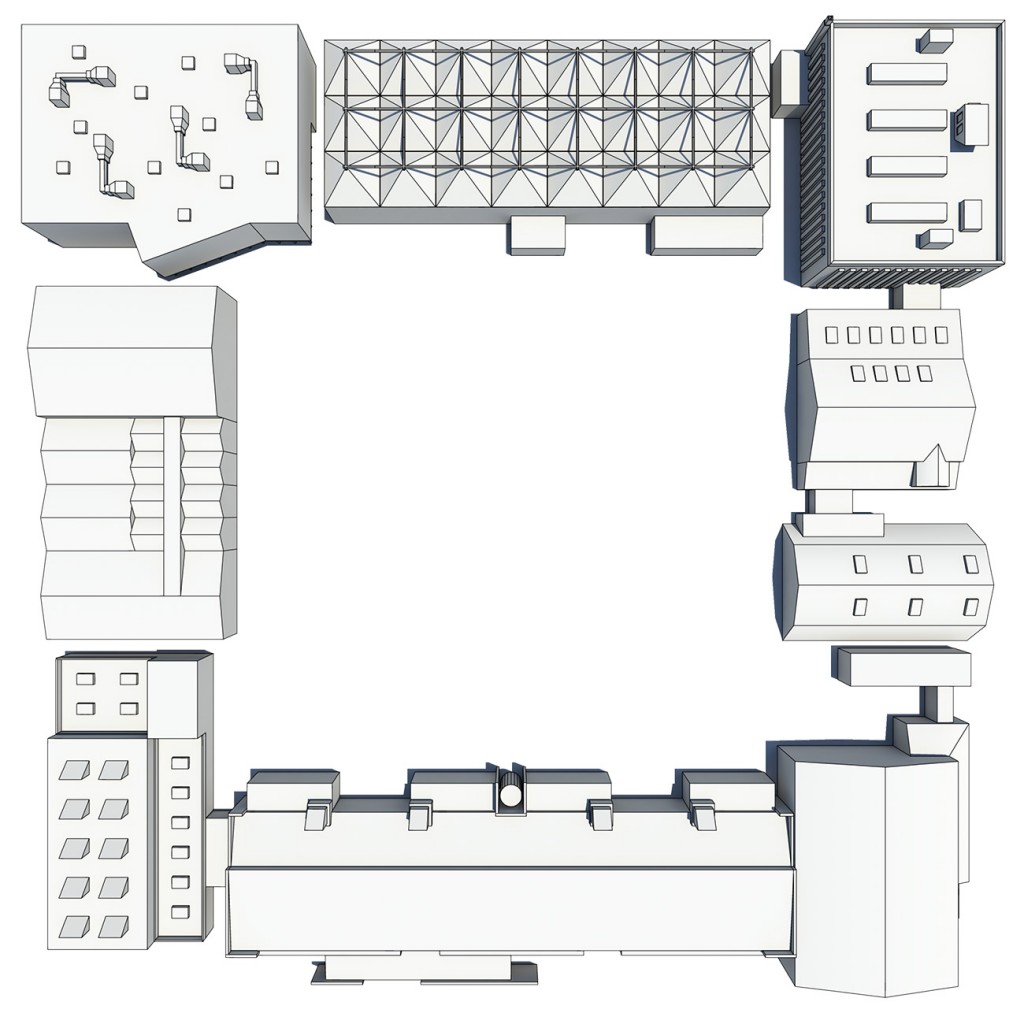 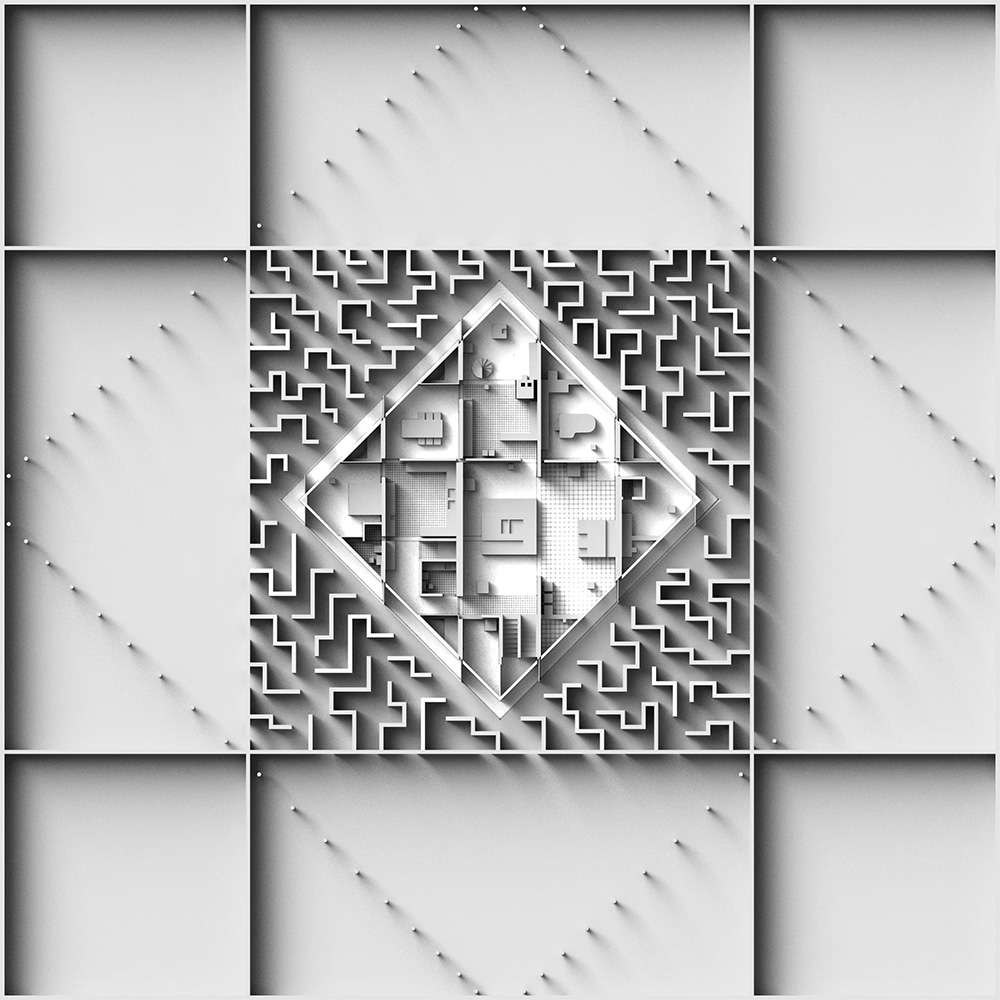 Stuck far too long in rendering experiments.
Maya refuses to snapshot my motion path.
Time is running away.

Floating borders; what is a strong demarcation between houses?
What does it mean to traverse one edge condition into the next?

The Labyrinth hides The Diamond. It is shy (like me).
There is not one door, but many. There is no right perspective, except the plan.
The larger I become, the more rooms I find that challenge me to be inhabited.

Unlike Hejduk’s Diamond, there is no stacking.
There is just the flow of one floor plan, with one glass roof.
In need of a context; thinking of the Serpentine pavilion.
What is there that is temporary about the Diamond?