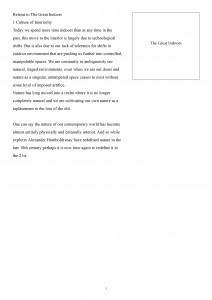 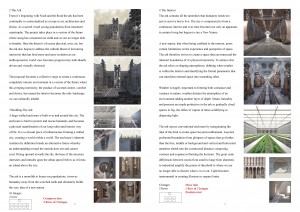 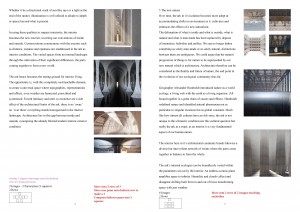 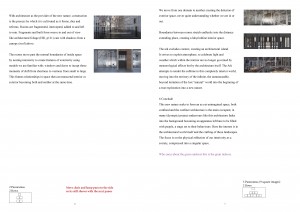 Retreat to The Great Indoors

Today we spend more time indoors than at any time in the past, this move to the interior is largely due to technological shifts. But is also due to our lack of tolerance for shifts in outdoor environment that are pushing us further into controlled, manipulable spaces. We are constantly in ambiguously un-natural, staged environments, even when we are out doors and nature as a singular, untampered space ceases to exist without some level of imposed artifice.

Nature has long moved into a realm where it is no longer completely natural and we are cultivating our own nature as a replacement to the loss of the old.

One can say the nature of our contemporary world has become almost entirely physically and culturally interior. And so while explorer Alexander Humboldt may have redefined nature in the late 18th century perhaps it is now time again to redefine it in the 21st.

From it’s beginning with Noah and the flood the ark has been continually re-contextualised as a trope in art, architecture and fiction. As a sacred vessel saving populations from imminent catastrophe. The project takes place in a version of the future where smog has consumed our earth and we are no longer able to breathe. Here the threat is of course physical, toxic air, but the ark also begins to address the cultural threat of increasing interiority that has bred more and more isolation as our anthropocentric world view becomes progressively individually driven and virtually obsessed.

The proposal becomes a collective surge to create a continuous completely interior environment in a version of the future where this creeping interiority, the product of societal control, comfort and choice, has meant the interior becomes the only landscape we can culturally inhabit.

A huge walled enclosure is built over and around the city. The enclosure is built to protect and rescue humanity and becomes a physical manifestation of our long-cultivated interior way of life. It is a colossal piece of infrastructure forming a walled city, creating a world within a world. The enclosure’s inherent isolation by definition breeds an alternative future whereby an understanding toward the outside does not and cannot exist. Rising upward towards the sky, the base of the structure intersects and intrudes upon the urban sprawl below as it forms an island above the city.

The ark is a monolith to house our populations, it moves humanity away from the scorched earth and ultimately builds the very idea of a new nature.

The ark contains all the amenities that humanity needs not just to survive but to live. The city is compressed to form a continuous interior and over time becomes not only an apparatus to sustain living but begins to sire a New Nature.

A new nature, that when being confined to the interior, poses certain limitations on the experience and perception of space. The ark therefore strives to create a space that can transcend the inherent boundaries of it’s physical interiority. To achieve this the ark relies on shaping atmospheres, defining what weather is within the interior and identifying the formal parameters that can transform internal space into something other.

Weather is hugely important in forming both constance and variance in nature, weather dictates the atmosphere of an environment adding another layer of depth. Steam, humidity and pressure are made productive in the ark to gradually cloud spaces in fog, the influx of vapour at times solidifying or dispersing light.

The ark rejects conventional enclosure by renegotiating the idea of the limit to create space beyond confinement. Layered, perforated boundaries form glimpses of spaces that go further than the fore, middle or background and vertical and horizontal members shrink into the constructed distance composing vastness and expanse (reforming the horizon). The great scale differences between rooms from small to large from |domestic to industrial| amplify the points of threshold to where we are no longer able to discern what is in or out. Light becomes instrumental in creating illusions to surpass limits.

Whether it be a directional wash of sun-like rays or a light at the end of the tunnel, illumination is well utilised to allude to |depth or space| beyond what is present.

In using these qualities to surpass interiority, the interior becomes the new exterior, inverting our conventions of inside and outside. Current notions synonymous with the exterior such as distance, expanse and openness are readdressed in the ark as interior conditions. The varied spaces form an internal landscape through the cultivation of their significant differences, the parts coming together to form a new world.

The ark hence becomes the testing ground for interior living. The opportunity is, with this completely un-breachable domain, to create a universal space where topographies, representations and effects, even weather are harnessed, prescribed and systemised. Forced intimacy and utter co-existence are a side effect of the architectural limits of the ark, there is no ‘away’ no ‘over there’ everything stands homogenised in the interior landscape. Architecture lies in this gap between inside and outside, synergising the already blurred modern interior-exterior condition.

Over time, the ark in it’s isolation becomes more adept at accommodating shifts in environment as it cultivates and embraces the effects of a new naturalism.

The delineation of what is inside and what is outside, what is natural and what is man made has been replaced by degrees of intensities, hybridity and artifice. We can no longer define something as solely man-made or as solely natural, distinctions between them are ambiguous. We could argue that the natural progression of things is for nature to be superseeded by our new natural which is architecture. Architecture therefore can be considered as the finality and future of nature, the end point in the evolution of our ecological community thus far.

Geographer Alexander Humboldt introduced nature as a world ecology, a living web with the earth as a living organism. |All bound together in a great chain of causes and effects|. Humboldt redefined nature and identified natural phenomena not as particular to singular locations but as global constants. Much like how almost all cultures have an Ark story, the ark is not unique to this climactic condition nor this cultural question but really the ark as a trope, as an interior is a very fundamental aspect of our human nature.

The interior here in it’s architectural continuity breeds likewise a diverse but inter reliant network of rooms where the parts come together in balance to form the whole.

The ark’s internal ecologies can be boundlessly varied within the parameters set out by the interior. An endless oceanic plane amplifies space to infinity. Humidity and clouds collect and disappear shifting built form in and out of focus transforming space with just weather.

With architecture as the provider of the new nature, construction is the process by which it is cultivated as it forms, dies and reforms. Rooms are fragmented, intercepted, added to and left to ruin. Fragments and built form weave in and out of view like architectural foliage (Hill, p121) cast with shadows from a canopy (roof) above.

The rooms move past the normal boundaries of inside space by nesting interiority to create features of exteriority using models we are familiar with; windows and doors to incept those moments of shift from shortness to vastness from small to large. This frames relationships in space that can transcend interior or exterior becoming both and neither at the same time.

We move from one domain to another creating the delusion of exterior space, never quite understanding whether we are in or out.

The ark excludes context, creating an architectural island. It strives to exploit atmosphere, to celebrate light and weather which within the interior are no longer governed by meteorological effects but by the architecture itself. The Ark attempts to render the sublime in this completely interior world, moving into the territory of the infinite, the unmeasurable, beyond imitation of the lost “natural” world into the beginning of a true exploration into a new nature.

This new nature seeks to form an as yet unimagined space, both confined and the confiner architecture is the main occupant, in many (dystopic) project endeavours like this architecture fades into the background becoming an apparatus left bare to be filled with people, a stage set to their behaviours. Here the interest is in the architectural world itself and the crafting of these landscapes. The focus is on the physical reflection of our interiority as a society, compressed into a singular space.