Here is a film, realised by Ramin Bahrani in 2009 called Plastic Bag, where a plastic is embodied as living being and filmed throughout his life. Werner Herzog’s voice accompanies the narration.

Narrating the rubble bonanza seems now, for me, the most crucial thing i have to define in order to fully deliver my project. Until now, it has mainly been presented under an infrastructural and economical lens – which it is, but the idea of economy have to be seen i think throughout the narrative without being explicitly mention.

The other crucial thing the project have to deliver is the reflexion that i have undertake for quite some time now on the paradoxe aesthetic-function of rubble/waste. A paradoxe between objects that have already thoroughly been aestheticised [almost to the limit of fetishism] (detroit ruins, greek unfinished construction,…) and the general idea that waste only exist nowadays under the spectrum of recycling [disposal and transformation into powder]

What the project does is to speculate on the use (as ‘usage’) of rubble outside the traditional recycling cycle. It speculates that a radical change in the economic market could give an impetus for a reverse or a disruption of this cycle.

Economy needs to be the plinth for rubble to exist both outside an aesthetic fetishism and useless unfunctionnal object.

I started to imagine the story of a brick [or its travel during a certain period of time] that would happen because of an important economic change :

[2020] : Image of demonstration. Hundreds and hundreds of people, carrying European flag, big images of important buildings, images of their house printed on cardboard,.. some of them are holding bricks, pieces of stone, pipes… with banners saying : ‘we want our bricks back’, ‘ After Brexit, now Brickxit’, …

[2021, 22 july] : Picture of the same point of view, on the first page of a national newspaper, with a huge hole in the facade. The title talk about an important robbery of bricks last night at the Tate. The first line of the Editorial on the right goes : Now they’re attacking the culture,…

[?] : On a CCTV stills, somewhere in the city, at night, two person are exchanging what seems to be a brick. A brick for money.

[2023] : A brick sits on a chimney in what seems to be a very bourgeois house. The image is a sort of still shot, the chimney is seen in a frontal view. The brick is next to a small frame with a family picture and on the right what seems to be a small gold sculpture. A huge painting in a golden frame sit above the black marble chimney.

[?] : A world map on a computer shows the trajectory of a dozen of supertankers in the international water.

[2028] : Official instagram account of the white house. A picture with a supertanker near a port. The caption “The USA have sign today an agreement with [boat company] in order to buy the total capacity of their next 6 supertanker in order to finish the construction of the wall on the mexican border by 2030. #DonaldTrump”

[2030] : A wall in a desert, looked like an elevation. A super long structure crossing the picture and the landscape. A few white banners, one of them saying : “Fuck the wall, give our money back”

[2050] : 3 bricks, old and grey sit on a plinth at the center of a exhibition room. A picture of the tate modern behind it, hang on the wall. Someone reading the booklet of the exhibition titles : ‘The show must go home’ 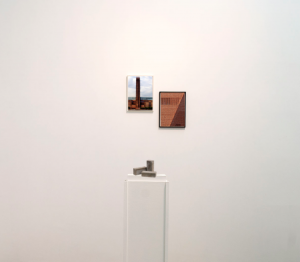